The Future of the Metaverse + AI and Data Looks Bright 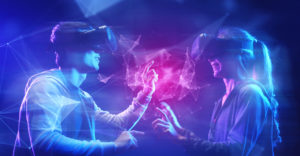 We’re on the cusp of major breakthroughs in the metaverse, that collective world of new augmented reality (AR) and virtual reality (VR) experiences that is gaining steam. The new meta modality will not only be a huge new source of user and behavioral data for enterprises, but it will be a fertile ground for deploying rapidly maturing AI technologies like NLP and computer vision.

AR and VR technologies have been simmering on the backburner for years. Up to this point, VR has primarily been used for immersive video games, although a few enterprise software companies have dabbled in AR and VR interfaces, including Looker before it was snapped up by Google Cloud.

But Facebook CEO Mark Zuckerberg put the collective worlds of AR and VR, i.e. the metaverse, firmly on the front burner last month when he announced Facebook was changing its name to Meta. The metaverse, it turns out, is a lot closer than many of us expected–perhaps as close as that sword in your Oculus-enabled hands.

This is great news for gamers, of course, but enterprises should also take notice, according to Dan Eckert, PwC’s resident AR and VR expert. “It’s getting significantly better,” he says. “There’s more users. There’s more interactivity. The environments are significantly more immersive.”

According to Eckert, the accelerated rollout is the result of a confluence of events. For starters, on the VR side (which is tracking ahead of AR) the technology for creating VR experiences has gotten significantly better in a short period of time.

“It used to take us six to nine months to build an interactive training simulation in VR. I’d have to have developers, and I have creatives and I would have artists and scriptwriters, and it was like producing a little movie or game,” Eckert says. “What used to take us nine months-plus I can now do in less than a week.”

Lots of progress has been made in VR headsets, or head mounted display (HMD), according to Dan Eckert, PwC’s resident AR and VR expert (SFIO CRACHO/Shutterstock)

The hardware has dramatically improved, too. Just a few years ago, a quality VR experience would have required a high performance gaming system, which would be tethered via a cable to the head mounted display (HMD). But today, users can pick up a quality, wireless HMDs for $200.

Lastly, the management tools have improved. “[Before] I pretty much need to go to MIT or Caltech to be able to keep it maintained and up to date,” Eckert says. “To manage 25 headsets, is not a big deal. But if I’m going to manage 2,500 or 5,000 or 10,000 or 80,000 headsets–now it goes into a wholly different world. I couldn’t do that a few years ago. I can do it now, and do it securely and do it cost effectively.”

Eckert sees enterprises adopting VR for training in the near future. PwC has purchased thousands of VR headsets and uses them to train PwC employees and clients. It uses VR headsets for sales meetings, even for traditional PwC services like auditing and consulting. It has even held a VR event for clients, which was very well received, he says.

“On the VR side, this is where we’re seeing an explosion, and it’s most of it is focused on training,” he says. “We did a study back in 2018 looking at the efficacy of using VR for training in the enterprise and the results were pretty spectacular. And they’ve only gotten better overtime because the cost create content is significantly dropping.”

The secret to VR’s success for training is deceptive simply, according to Eckert.

“In VR, you can’t multitask,” he says. “You’re completely enveloped in the environment. So what used to take us an hour to train in the classroom I can do in 20 minutes in VR because I’m not distracted. It’s it’s like a one-on-one coaching session to work on these soft skill training that we find is very beneficial.”

AR also has compelling use cases, such as providing field technicians diagrams through their mixed reality glasses. But mixed reality headsets are very nascent right now, which Eckert says will slow AR’s rollout.

Training is the killer app for VR in the enterprise, PwC’s Eckert says (Alfa Photo/Shutterstock)

“The technology is not ready for primetime, if you will–in my opinion, anyway,” he says. “I think it’s amazing for very specific use cases, but don’t plan on everyone wearing a headset to do their job over the next two or three years.”

As enterprises experiment with AR and VR, the applications for data and AI will be widespread. The data analytics and AI angles are nascent today, says Eckert, but the potential uses are significant.

The next generation of VR headsets will collect more user information, including detecting the stress level of the user, and even facial recognition. “We’re going to see more capabilities and really understanding the biometrics that are generated from an individual, and be able to use that to enhance the training experience,” he says.

That data collection will enable a feedback loop with the VR user. For example, if an enterprise is using VR to simulate a lineman repairing a high-voltage wire, the headset will be able to detect the anxiety level of the user. That information will inform the enterprise how to personalize the next set of VR lessons for the employee, Eckert says.

“Remember, you’re running nothing more than software on a digital device, but because it senses three dimensions, you can put input through gesture hand control, through how you gaze, where you gaze. It’s collecting data,” he says. “Now that data can then be acted upon to create that feedback loop. And that’s why I think it’s so important. In this immersive world that we have, that feedback …will make it even that much more realistic of an experience.”

AI will be a tremendous addition to the AR and VR experience, particularly with cognitive agents. PwC is already experimenting with its cognitive agent, called Astro, that installs on smartphones and guides PwC employees through corporate tasks. In the near future, these bots will function like avatars that guide VR users.

“If you’re in a situation where you’re being trained on something and you have a question, using natural language you can ask the question of the avatar as if they’re the instructor and they’ll communicate back to you information that will help you achieve the desired result,” Eckert says.

Many of the ingredients are already in place for a big surge in adoption of VR technologies. From the powerful wireless VR headsets and low-latency 5G networks, to development and management tools for the VR experience and NLP-based cognitive agents, the table is set for an explosion of VR use cases.

We lack just one element for AR to take flight in the real world in a big way. “What we’re missing are the glasses,” Eckert says. “The glasses aren’t there yet.”

Even if some company hits the sweet spot with a pair of capable and affordable AR glasses tomorrow, it will take some time, perhaps two to three years before it hits critical mass, says Eckert. “At CES they just announced contact lenses that can do this,” he says. “That capability is coming, and it’s almost in touching distance, but not quite yet.”

Omar Wael, Egyptian Teenager, a 13-year-old kid has created a metaverse He used his mother's old clothes. As a kid growing up in Egypt,...
Read more
AI

Metaverse won't give you a break time. There will always innovation in the virtual reality Seeing that metaverse is a free space to do many things, A...
Read more